“Do it big” has become a national catchphrase to the point of near overkill, but I’d be remiss to describe the activity related to this past weeks Magic City Classic activities as anything other than doing it big. The week that culminated in the 74th annual football game played between Alabama A&M University and Alabama State University on October 31st at Legion field, was perhaps the highlight of a week that included a treasure trove of free live entertainment and performances by some of raps current, biggest stars.
On Tuesday, October 27 the Birmingham Museum of Art played host to vocalist Yvette Cooke, former lead singer of 1970’s R&B hit making act Rose Royce, and Eddie Holman, the 1960’s and 70’s era crooner whose hit “Hey There Lonely Girl” reached number two on the charts in 1970. The museum served as an appropriate venue for these two acts of yester year who, like the art preserved in its halls, are enjoyed and lauded by fans of classic soul today.
On Wednesday, October 28 the choirs of Alabama A&M University and Alabama State University performed to a packed house at Birmingham’s historic Sardis Baptist Church in the Magic City Classic Choral Festival. Guests enjoyed renditions of old Negro spirituals and modern gospel classics performed by amazing soloists and fantastic choruses.

The nationally syndicated Rickey Smiley Morning Show, hosted by the comedian and Birmingham native Ricky Smiley, broadcast live from the concert hall at Birmingham’s Legacy Arena from 5 to 9 a.m. on Thursday, October 29. The show was a party from start to finish, characterized by Smiley’s side splitting southern tinged humor, bold, bodacious, beautiful cohost and recording setting rapper The Brat (a figure head on the now defunct but legendary recording label So So Def), and a team of other zany, culturally relevant hosts, featuring a performance by Grand Hustle (rapper and reality star TI’s recording label) recording artist Young Dro. A packed house of rowdy, raucous fans enjoyed incredible comedy skits, reports of the latest R&B and Hip Hop news, fantastic music, and the attention of its hometown hero, Smiley.

The same evening (October 29), Legacy played host to New Jack era R&B hit makers Jodeci, Dru Hill, SWV, makers of nineties smashes “Forever My Lady”, “Thong Song” and “Weak” respectively, and rap and beat box pioneer and legend Doug E. Fresh. The evening was absolutely magical, with Fresh providing the MC and beat box skills that have moved dance floors from Birmingham, Alabama to Birmingham, England, Jodeci making females heart flutter with serenades of romance, Dru Hill making every woman feel as if she was the subject of their hit “Beauty Is Her Name”, and SWV recanting why his loving “makes me weak”. 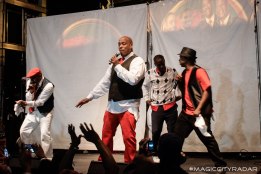 Legion field was the site of a concert headlined by rap legends Whodini, with opening acts Logan the Entertainer and Alvin Garrett And Just A Few Cats on Friday, October 30. Whodini ran through classic hits such as “Friends” and “Haunted House of Rock”, thrilling a swollen, hungry, excited crowd with their energy, fantastic word play and personal style, while Logan, Alvin, and Just A Few Cats worked in concert, wooing those in attendance with hits like the sweet, swinging “Lost In Love”.Grammy nominated nineties “bad boys of love” Jagged Edge was to perform following the football game on October 31, but rain led to cancellation of the show.

To round out the week’s excitement, rap titan Rick Ross performed live at Platinum of Birmingham in a post Classic set including chart topping hits “Hustling”, “Super High”, and “Diced Pineapples”, with his booming baritone and matter-of-fact delivery reminding fans the he is in fact “a boss”. In the same vein, rap superstar Two Chainz highlighted the “Watch Out” Classic Kickoff Concert at the MusiQMall at 1709 1st Avenue North, with a performance whose personality and exuberance matched that of the always confident, appropriately cocky, gifted Atlanta rappper. No doubt the birth of his son a month ago contributed to the joy and verve with which he performed.
All this was just a sampling of the fantastic offerings that this 74th annual Magic City Classic offered our city. I haven’t mentioned the bevy of fabulous food, drink, snack, and cultural options that vendors and fans offered and enjoyed this Classic season. Magic City Radar has no choice except to assume that this seasons offering are a foreshadowing of what should be a magnificent 75th annual Classic in 2016.