Miles College vs. Tuskegee University, originally scheduled for Albert J. Sloan-Alumni Stadium, has been moved to historic Legion Field. The scheduled kickoff time has also been changed to 5 p.m. this Saturday. Tickets can be purchased at the Legion Field Box Office or at Miles College. Fans should also be reminded Legion Field’s Clear Bag policy will be in effect for the game.

Magic City Radar was granted the opportunity to talk with Assistant Athletic Director Albert Moore about the upcoming game. Here is what he discusses about the game…

What are some of the steps your team is taking to prepare for the game against Tuskegee?
You practice how you play. So we have to make sure we are working hard and smart as we get ready for this game. Tuskegee is a strong, disciplined football team and we will need our best effort to be able to get a win. Paying attention to detail during practice, not just what they might do, but what we are capable of doing, will go a long way toward determining who will come out on top.

Who are some of your key players you depend on in a game like this and why?
We depend on our entire team, on offense, defense, and special teams. We have been able to score points on all three units this season and expect our players to continue to give maximum effort when they hit the field.

Name some things on offense and defense you would like to execute during this game?
On offense, we need to be more consistent. We have several strong players who are capable of performing at a high level but this has to happen on every play. We can’t take any plays off. Defensively, we have to win the line of scrimmage and contain their quarterback.

How important is this game to you and your players to win?
Tuskegee is certainly a rival of ours, not just because of the proximity of the teams, but in style of play and recent success of the programs. Also, it is our last home game of the year. We want to give our fans the best effort we can and at the end of the day, if we get the best effort for everyone, we have a great chance of being successful.

This game will mark the first time the two teams have met in the Legion Field since the 2009 Labor Day Golden Classic, where the Golden Bears erased a 16-point deficit to earn a 23-16 win and end the Golden Tigers’ 17-game conference win streak.

Requests for media credentials for the game can be made through the Golden Bears athletic website, http://www.milesgoldenbears.com. For more information, contact the Office of External Affairs at 205.929.1102. 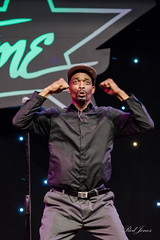