Skip to content
The A-List Networking Group, LLC is becoming a well-known name in the Birmingham business community. The A-List, as they are affectionately called, is a group of professional women whose goal is to make valuable connections with career-minded professionals looking to share advice, resources and referrals through networking and community service. 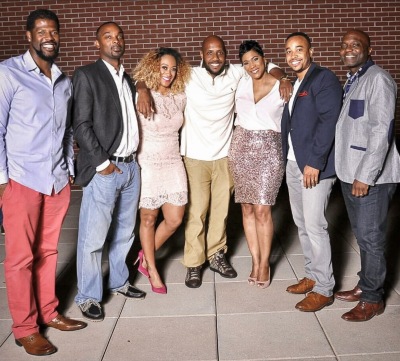 Since it’s inception last year, the A-List has hosted several successful networking mixers and nonprofit fundraising events. Their mixers bring out Birmingham’s most elite business professionals who enjoy making connections with like-minded individuals in a relaxed and upscale atmosphere.
Alichia Webster, Founder/CEO and Gabriel Henderson, Director of Business Development are both Licensed Real Estate Professionals at Keller Williams Realty Vestavia. Their real estate business thrives on making valuable connections and lasting business relationships. But their ultimate goal is to make a difference in their community.
“We are on a mission to make a difference in the Birmingham community and beyond.”
The A-List Networking Group will host its 2nd Annual Holiday Fundraiser benefiting Children’s of Alabama on Thursday, December 8. This event raises vital funds to support the needs of the Neonatal Intensive Care Unit and is a very personal mission for the group and it’s member, Alichia Webster.
“Last year, my daughter suffered the loss of her baby, who was stillborn at birth due to a

placental abruption. She was born at 40 weeks and weighed 8 lbs 9 oz. Needless to say we were devastated when we made it to the hospital and learned the doctor could not find the baby’s heartbeat.  Our Angel Skylar Grace is the vision behind the group’s decision to support a cause and give back to charity which we feel would be a wonderful way to memorialize our loss. God led us to Children’s of Alabama NICU to support the mission of the hospital.”
Children’s of Alabama is a private, not-for-profit hospital and treats all children regardless of their family’s ability to pay. Children’s is the 3rd largest pediatric hospital in the United States and take care of the most critically ill infants in the state of Alabama. It takes approximately two-million dollars a day to run the hospital and it is the only free-standing pediatric hospital in Alabama.
Community support is a very important factor to the success of Children’s and the A-List is honored to have the opportunity to raise funds and awareness to benefit the Neonatal Intensive Care Unit. The group received  confirmation during a tour of the NICU last December when the first patient they saw in the unit was named Skylar, thats when they made a commitment to raise funds and awareness each holiday season to support the hospital.
The A-List Networking Group’s Holiday Fundraiser, License to Heal, the James Bond Edition, kicks off December 8 at 6pm at SCENE at Pepper Place, featuring Grammy nominated, Alvin Garrett, who will host and perform along with Logan the Entertainer. Come out and support a worthy cause and enjoy an evening of food, fun, and fundraising  with heavy hors d’oeuvres, drinks, fabulous door prizes and DJ C Dubb mixing live!
If you would like to make a difference in the life of a sick child, please consider being a sponsor, make a donation, or purchase tickets to attend LICENSE TO HEAL at www.alistbham.com. 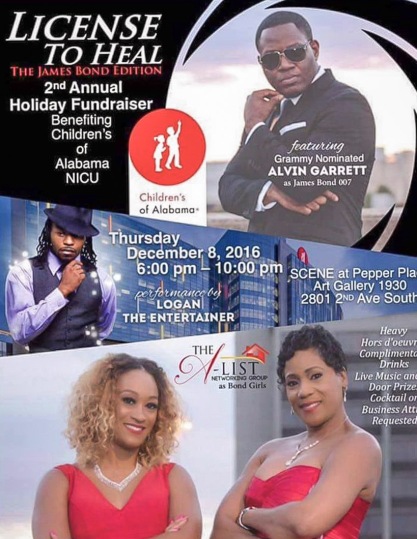 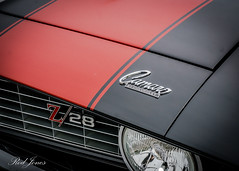