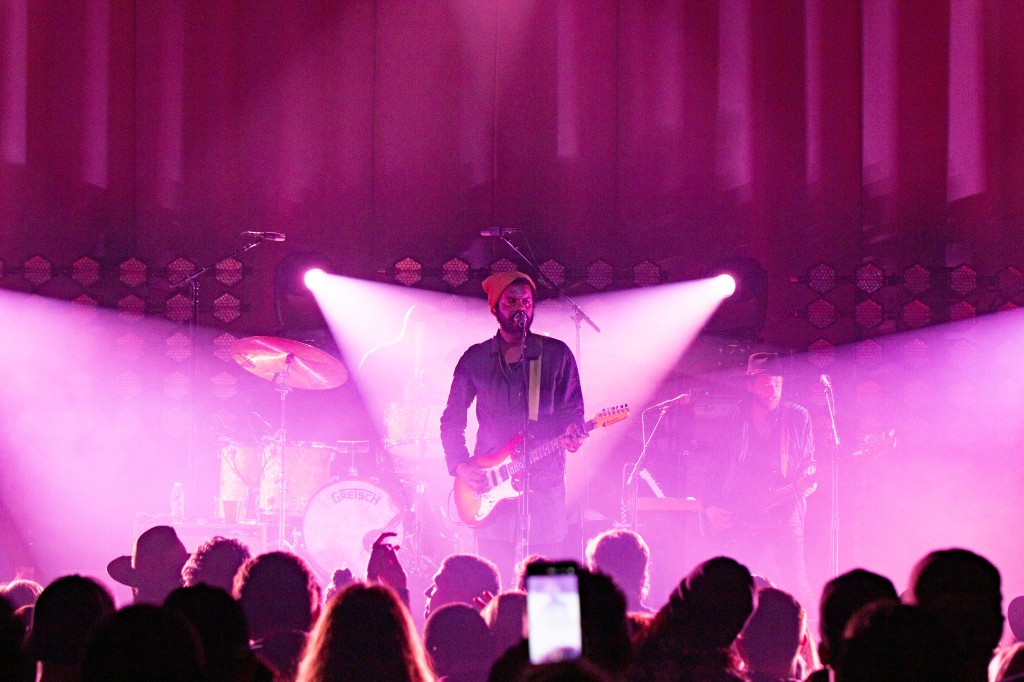 Nearly five months after beginning full capacity shows, the Mars Music Hall, located at the Von Braun Center, opened its doors to host Grammy award-winning guitarist and bluesman, Gary Clark Jr. The music hall is an intimate venue in downtown Huntsville, Alabama with an open floor plan that accommodated a crowd of 1000 plus guests Monday evening.

The show began promptly at 8pm with Clark’s own Texas-based hip hop artist, Blackillac. After a short 30 minute set, Clark takes the stage along with bandmates JJ Johnson, Elijah Ford, King Zapata, and Jon Deas against a backdrop of beautifully designed stage lighting. GCjr begins his set with a passionate rendition of Bright Lights from the 2011 Bright Lights EP. An enthralled and energetic crowd cheers and belts out this more popular tune. He follows this with the call to action, rousing anthem Got to Get Up. Clark checks in with the crowd and then eases through a 13 set song list, from What About Us, Our Love, and Feed the Babies, evoking Curtis Mayfield vibes with an effortless falsetto. He moves us into Low Down Rolling Stone and ends the song with a grimey distorted electric guitar solo that just enters your soul and makes you throw your hands up in absolution. Clark gives us the souled-out emotion-filled cathartic medicine we did not know we needed. His set comes to an end with When My Train  Pulls In only to return to the stage after the enthusiastic crowd vies for an encore, shouting “Gary! Gary! Gary!” The chants turn to applause as the tall lanky bluesman and his lively band of four return to the stage to close out the two-hour set. He officially ends the night with Guitar Man and Pearl Caddy.

His tonal range, from gritty bluesman to the light airy falsetto of Curtis Mayfield (or even DeAngelo), brings an array of depth that makes him the forerunner of modern-day blues/soul fusion. Accompanied by the passionate wails of the electric guitar, A Gary Clark Jr show is a must-see.