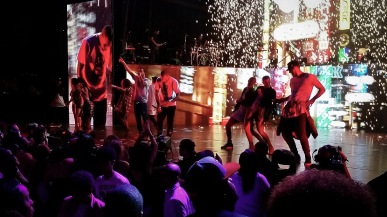 Last night, Chris Brown put on a spectacular performance at Oak Mountain’s Amphitheater. This was the musical artist second appearance in the Magic City in recent years. In December of 2014, Mr. Brown performed at the Legacy Arena, formerly known as the Birmingham Jefferson Civic Center or “BJCC”. I had the opportunity to see Mr. Brown on both occasions and each performance was something special. The dance choreography and musical melodies were nothing less than     powerful and invigorating as he “Moved the Crowd”. Mr. Brown did not come unaccompanied as other artist such as: French Montana, Ink, Usher, and others joined him on stage.

In addition to the artist, the light and sound show featured under the sky presented the perfect evening ambiance. There was something truly special about seeing and listening to the artist outside beneath a star lite sky. The only thing I would say could have made the evening even better would have been a larger crowd attendance. A packed audience would have probably enthused the artist even more and torn-down the house. A larger crowd would have been the perfect complement to the evening’s musical performance. Crowd participation was probably low due to the fact the show took place on a Tuesday night. Tuesday nights in the Magic City generally do not offer much. Birmingham and the surrounding cities are more of a weekend entertainment environment. I could see there being a much larger turn-out had the show taken place on a weekend. However, I guess there would have also been a much larger cost as well for a weekend performance. Especially, with Labor Day coming-up this weekend. Thanks for showing up and performing Chris!!! So many other artist have cancelled on us in the past!