Despite the absence of a professional sports franchise and the fun they provide, the city of Birmingham was nonetheless the scene of professional entertainment the weekend of September 18-20, 2015. A performance by veteran comedic actor Mike Epps, star of Ice Cube’s Friday film franchise and an award winning standup comedian, and an exhibition match between the 2015 FIFA Women’s World Cup champion US soccer team highlight this past weekend’s happenings. 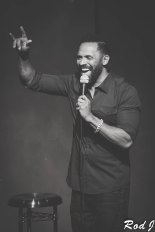 Mike Epps stepped in seamlessly for both the 2000 and 2002  follow-ups to rapper Ice Cube’s 1995 hit movie Friday, about the misadventures and victories of a misguided young man in South Central Los Angeles on his first day off after losing his job. As main character Craig’s well-meaning but ethically challenged cousin Day-Day, Epps provided the perfect foil to Ice Cubes Craig. Since then Epps has gone on to commercial and critical success in film and standup comedy, and he brought his always introspective, socially conscious, politically incorrect brand of comedic brilliance to Birmingham’s Stardome Comedy Club with opening act Henry Welch on 9/18/2015. 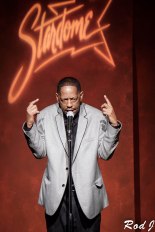 Comedian Henry Welch, who attended Montgomery’s Alabama State University and has been a regular on BET’s Comic View, HBO’s Def Comedy Jam, and Showtime’s The Big Black Comedy Show opened for Epps with observations of current affairs from a decidedly southern standpoint. Tall and regally dressed, Welch provided the audience with a “headlining” performance of his own.

Epps, who early in his career opted for decidedly urban fashion choices such as team jerseys and baggy jeans consistent with the trends of earlier decades, has now effortlessly adopted current fashion trends, which tend toward slimmer fits and a business casual ethic.

Wearing a chic blue button up, a rugged yet versatile blasted jean and a gorgeous brown lace up, Epps nailed both the aesthetic and artistic aspects of his performance. The man is, simply, a comedic genius and a social chameleon whose jokes hit the perfect note for attendees of all ages, cultures and creeds. His performance was indeed one of the highlights of this past Friday evening, leaving MagicCityRadar.com and the city of Birmingham hungry for future performances. For more information on Epps performance and upcoming ones, contact the Stardome Comedy club at (205) 444-0008 or http://www.stardome.com.

On Sunday, September 20, 2015, Birmingham was treated to an exhibition soccer match between the newly minted US women’s World Cup championship team featuring legendary striker Abby Wombach, and a team from Haiti, at historic Legion field. Though overmatched, the Haitian team nonetheless provided a spirited, gritty opponent in a 9-0 loss to the Americans. Displaying deft, superior ball handling, the Americans were up four at the half. The US was originally slated to face Australia, who was expected to provide a more challenging and entertaining opponent, but that team pulled out for an undisclosed purpose.

Nonetheless, a near capacity crowd was treated to an exciting and refreshing professional sports match, a privilege this town is rarely privy to.

Another notable event was the annual Saint George Middle Eastern Food Festival, held September 18-20 at the St. George Church at 425 16t Avenue South, Birmingham, Alabama 35205. Celebrating its 30th year in existence, the menu included delicious Greek staples such as Kibbee, a round steak finely ground, mixed with cracked wheat, onions, pine nuts and spices, brushed with butter and baked to perfection, and the decadent Zalabieh, yeast dough made with a blend of anise, mahalab and sugar, deep fried, dipped piping hot into a “special” syrup and topped with powdered sugar. 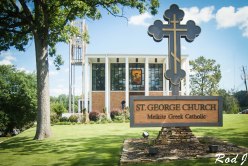 What started as a steam table thirty years ago has now morphed into an event that serves an estimated 8000 people over three days. For further information on the event and its history, contact the church at (205) – 252-5788 or saintgeorgeonline.org.
As you can see, September 18-20 provided “professional” options in entertainment from comedy to sports to food. We hope that you continue to use magiccityradar.com for your culture and entertainment revue needs.