Sports, music, comedy, and food were all at the forefront of Birmingham’s entertainment offerings this past weekend. The comedy stylings of Guy Tory and Steve Wilson, a listener party hosted by Tom Joyner, WBC Heavyweight boxing, and a tasting party held at Sloss Furnace highlight the happenings. 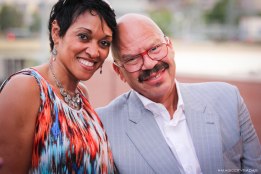 Tom Joyner started the weekend early on Thursday, September 24, 2015 with his “Listener’s Appreciation Party”, hosted by 98.7 KISS FM and Coca Cola. The roof of the Southern Kitchen, in the Uptown District, served as an intimate, outdoor venue for this event, which was DJ’d by local radio icon B Bryan of 95.7 JAMZ, featuring performances by Grammy nominated singer Alvin Garret and Just A Few Cats, and Logan the Entertainer. Citing his oft used catch phrase, “it’s my passion. I love what I do”, Joyner made this appearance in Birmingham as a part of a cross-country tour in honor of his listener’s.

The Comedy Club Stardome hosted the comedy team of Guy Tory and Steve Wilson on their “Jekyll and Hyde” comedy tour, September 25-27. Performing nightly, the duo provided a sort of mad scientist transforms to mad monster set with Wilson as Dr. Jekyll opening for Tory as Mr. Hyde. The performance was hilarious, and is perfectly cast as Wilson’s relaxed delivery plays off the more frenetic, heated performance long associated with Guy and his slightly more famous sibling brother Joe, of Poetic Justice fame.

Tory got his start in show business as a production assistant on Martin, in movies and on BET’s Comic View, while Wilson has been heard on the Bob & Tom Show, a national radio show heard in over 135 cities, Playboy radio and on E!

In what was the toughest fight of his still relatively short professional career, Tuscaloosa native and World Boxing Council (one of the four organizations that sanction world organized boxing bouts) Heavyweight champion Deontay Wilder defeated Johann Duhaupas of France at Legacy Arena on Saturday, September 26, 2015. While Wilder dominated the fight based on punching percentage, with 326 punches landed to the challengers 98, winning by TKO in the 11th round when referee Jake Reiss stopped the fight, Duhaupas’ punches caused considerable swelling under Wilder’s left eye by the second round. Likewise, Duhaupas’ ability to go the distance exposed Wilder’s sometimes undisciplined, “wild” brand of fighting in which his anxiousness to knock competitor’s out results in out of control punches which nearly cause him to fall down. He’ll need to clean that up if he any chance to defeat the big, powerful, disciplined Wladimir Klitschko, holder of the unified heavyweight title for the last nine years, who he hopes to draw in an upcoming fight. For more information on the fight, visit espn.go.com.

Breakin’ Bread, the 13th annual local flavor festival presented by the “Birmingham Originals”, a coalition of 35 of the city’s best restaurants, served samplings of their signature dishes on September 27, 2015 from 1-5 pm at Birmingham’s historic Sloss Furnace. Guests enjoyed fantastic samples of local indigenous dishes with the proceeds benefitting Camp Smile-A-Mile and Make-A-Wish Alabama.