Yohance Myles, is a native of Birmingham, Alabama, born and raised in Central Park, who is making his mark in Hollywood. He has appeared several movies alongside big stars which include, American Hero (Stephen Dorff, and Eddie Griffin), Grudge Match (Sylvester Stallone, Robert DeNiro, and Kevin Hart), This is the End (Kevin Hart and Seth Rogen), 2 Guns (Denzel Washington and Mark Walhberg), Hours (Paul Walker), Fire with Fire (Bruce Willis, 50 Cent, and Rosario Dawson), and more. He has worked on several major television networks including NBC, CBS, USA, FOX, CW, Hallmark, SCI-FI, AT&T, and more. He is known for his role as Dennis on the CW’s series “Containment” and is gaining momentum with his role as Leon Grant on FOX’s drama episodic series called “Shots Fired” co- starring alongside of Sanaa Lathan and Stephen James. Myles is a multifaceted actor, having worked as a stage actor for roughly 19 years, and as a celebrity film/TV actor for approximately 13 years. He has definitely found his stride. He gave Magic City Radar the privilege of talking to him about his road to success, the significance of his current work, his vision for building Birmingham’s legacy in stage and film, and where he’s going from here.

MCR: For those who don’t know, who is Yohance Myles?

YM: I am your brother, your next door neighbor, your friend, your classmate, and an example of hope and inspiration for youth. I am all that God has shaped me to be.  I am “Birmingham”. I graduated from Ensley Magnet High C.O.N.E (Class of 1998). I am an alumnus of Alabama State University Theatre Department. My mother is Wanda Webb Moore and my step-father is Ronnie Moore, both of McCalla, Alabama. She is totally responsible for fostering my earliest artistic gifts. My siblings consist of an older sister, Rashida Agee (Trussville, AL), and brothers  Gary Myles (Birmingham), Joshua Myles (Birmingham), and Joseph Webb III of the Carolina Panthers (NFL). My wife is Kimberly Morgan Myles, actress/director and former Miss Mississippi 2007 title holder. I have four children, Maliq, Miciah, Christian, and Bella Grace Myles. My wife and I are greatly anticipating a new addition to our family this summer,  another boy who will be named after my father’s family name “Jackson”. These are great times in my life.

MCR: What experiences at Alabama State University shaped who you are as an actor?

YM: Prior to attending ASU,  I was taught and inspired by my high school drama instructor Mrs. Yolaine Joseph, who gave me the foundation upon which to dare myself to explore the imaginative world of acting. After seeking her guidance, I was then introduced to the “out of the box” but seasoned actress and director, Dr. Tonea Stewart. Stewart is currently Dean of the College of Visual and Performance Arts at ASU. She still operates as my mentor who has given me invaluable advice and constructive guidance throughout my career.

MCR: How’d you get your start as a professional actor?

MCR: CW’s “Containment” follows an epidemic in Atlanta. Who was your character on the show?

YM: I portrayed a character named Dennis, who is a supervisor tech at BitScan. At the time the initial outbreak occurs, Dennis and his employees are quarantined inside their workplace and several other sections of the Atlanta. The plot follows the cities attempt to survive and discover how this deadly virus developed.

MCR: What’s the best thing you learned either personally or professionally from Denzel Washington?

YM: Work ethic! I’d heard about how hard he works, but to see it in person is quite moving. One day on set, as Denzel and Mark Wahlberg were finishing up a scene I decided to walk over and speak with Denzel. But as I’m making my way over to exchange stories a production assistant kindly stops me. When I tell him what I had planned to do, he says in a subtle voice, “Not at this time, Denzel’s still in character”. Wow! I assumed since we were taking a break that I could come over to converse with Denzel but his true commitment to character development was always in session”.

MCR: Who is your character on FOX’s “Shots Fired” and why is this show appropriate 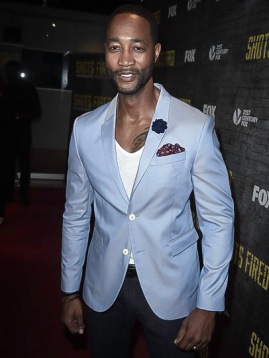 for the social climate in which we currently live?

YM: “That’s a fantastic question to ask, man. We’re making history per dialogue for the fight for equal justice within our Criminal Justice system regarding African-Americans. Shots Fired is about the murder of two young boys (white and black) in a small North Carolina town. I play Leon Grant, the father of Cory Grant (Marqus Clae), who is considered an eye witness to one of the shootings. As the plot develops my son is becomes a suspect, and the relationship between father and son is tested in a way that shows the compassion, care, pride, and love. The show is definitely appropriate for the times in which we currently live. FOX is not here to solve any problems but to present a body of work that is a reflection of our communities, law enforcement, and race barriers that plague us today.

MCR: Are you working on any personal projects?

YM: Yes! I completed a film last year called “Created Equal” directed by Bill Duke. We are so excited about its entry into the Sunscreen Film Festival 2017. This film is about a young Catholic nun who wants to become a Catholic priest. I am one of the lead defense attorneys, who represent her as she fights to sue the Catholic Church for sex discrimination.  This is a great story about women’s rights and the pursuit of religious expression/freedom. Check out the trailer on YouTube.

MCR: Yeah! Who doesn’t know Bill Duke for that shiny, bald head and that glare if nothing else (giggling)? But he’s always been a great actor as well.

YM: (laughing) “Right! An interesting story is that I’d met Mr. Duke as a sophomore in college at theatre conference and I never saw him again until I go into the film callback for the movie and Bill Duke is its director. I had no idea that he was the director prior to walking in to audition that day. I was so shocked but excited at the same time. It just shows that nothing is a mistake, man. Our lives are ordered by God. He has a plan for us and things work exactly according to His plans. I am also working on a project connected to Oprah Winfrey’s OWN network, but I can’t tell you what it is right now (laughing). I hadn’t told anyone about this project but somehow there a little leak about the Oprah Winfrey project. Thankfully, they don’t know exactly what it is yet”.

MCR: Well, I don’t know either, and you won’t tell (laughing). How can fans reach you?

YM: “No, I’m not (joking)! I am highly encouraging fans, friends, and supporters of my career to please follow me on social media at yohance_myles on Twitter, @yohancemyles on Instagram, and on Facebook a Yohance Myles. I send this info to Hollywood, who uses it to identify my home city and state as the lovers of film/tv, especially the ones I am a part of. It helps to identify Alabama as a demographic for supporters of the art, namely film and television.

MCR: This was a blast. I enjoyed it. Thank you very much for your time.

YM: “My pleasure, man. The magic in Birmingham is real”!