Magic City Radar Weekend Review:
Posted by: T. D. Davis
Comedy and culture have been recurring themes in entertainment throughout the summer and early fall of 2015 in Birmingham, and the city again played host to a rich if brief lineup of those events this past weekend.

The thirteenth annual Fiesta Birmingham, Alabama’s largest celebration of Hispanic heritage and culture was held in historic Linn Park in downtown Birmingham on Saturday October 3, 2015 from noon until 8 p.m., with the goal of educating the public about Hispanic countries and their cultures. Through vast presentations of food, dance, dress, and custom indigenous to the countries and cultures across South American, Central American and Spanish Europe, presenters gave attendees a glimpse of the beauty, glamour, mystery, and love that are synonymous with the Hispanic demographic throughout Alabama, the United States, and the world. 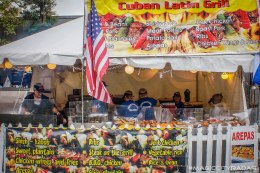 The “Cuban Latin Grill” served delicious indigenous dishes such as arepas (flatbread made of ground maize or cooked dough) and fried plantains (cooked banana), while two gorgeous women adorned in flamenco dresses that included fantastic red hues and sexy, form fitting cuts danced the Flamenco with all of the marvelous vocalizations and rhythmic sounds of palmas (hand clapping) and pitos (finger snapping). 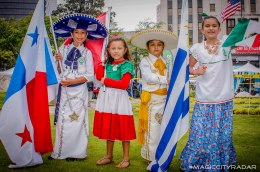 At the same time, male children modeled the sombreros (a wide brimmed hat made from weaving reeds together which shelter men from the intense country side sun) and gorgeous European style pants and shirts, and female children modeled beautiful huipil (long sleeveless cloaks that resembles a loose dress) and quechquemitl (intricately decorated and adorned ponchos worn over huipil).
Likewise, Hispanic members of the broad business community from Regions Bank promoted the “Register To Win a Green Regions Bike” giveaway, as well as representatives of the Latino Newsletter (contact it at http://www.latino.news.com). All in all, it was a glorious representation of the vibrant, lovely Hispanic demographic in Birmingham and throughout Alabama. For more information, see http://www.fiestabirmingham.com.

Comedian Bruce Bruce performed at the Comedy Club Star dome, nightly, October 2-4. Bruce, of BET’s Comic View and Coming to the Stage fame has long been known as a hilariously funny man whose genius is as much his ability to tell jokes void of excessive vulgarity as his sparkling brand of self-deprecating humor. He performed a gut busting set on the night Magic City Radar attended to a sellout crowd, many of whom commented that they never cease to be completely entertained by the man.

The writer attended the 1:30 p.m. matinee of The Martian, action super producer Ridley Scott’s tale of an astronaut whose is left on Mars when he is struck and injured by debris while he and his team are on collecting soil samples, a high category dust storm renders them unable to locate him, and they have to abort mission to save themselves. It stars Matt Damon as Captain Mark Watney, a botanist whose training and sophistication enable him to grow food reserves on a planet where nothing grows, until his team is able to rescue him.
What the movie masterfully does is paint a picture which begs the question, “What do you do in a situation where there is nothing you can do except fight, alone and without company or resources, to survive”? How many of us would lose our minds and give up, thus forfeiting the opportunity to survive that Watney’s courage afforded him? I’d venture to think the answer is many. Running 142 thrilling minutes, The Martian is a must see for movie goers and lovers.