Model, Actor, Host, and Virtual Influencer are just a few words used to describe the Mogul in the making Mr. Lee Barney. Born and raised in Erie Pennsylvania, Lee always knew he was destined for greatness.  With a love for sports, he went to pursue a career in football at Georgia Southern University as a running back from 2008-2011. Lee moved to South Florida and started training with the Miami Dolphins NFL team and after being cut from the team because of an injury, and after being asked several times, he decided to pursue a career in modeling.

In January of 2016, Lee decided to do a photo shoot with a well-known photographer Marvin Bienaime and from those photos he went viral on Instagram. He gained a large number of followers (over 70K) and features on major blog sites such as VH1, Bossip, Naturally He’s Dope, Post Bad Beards and more! After gaining all the attention, Lee was approached with the opportunity to walk in New York Fashion Week which would be his first time ever walking in a fashion show. Once he arrived in NYC, designers immediately jumped on him and he ended the week after walking in a total of five different shows which was a huge milestone in his career.

Lee Blair1Continuing to pursue his journey, Lee was recently the QGentleman Model 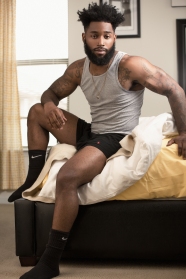 of the Week, he was a featured model in Sheen Magazine’s “Shades of Blackness” fashion show during Legendary Weekend. He also just inked a deal with a beard care company as a brand ambassador which will be announced soon. In addition to the success he has gained in the fashion world, education has always remained important to Lee. He is a graduate of Johnson C Smith University with a Bachelors of English degree. He has been offered a few movie roles which will start filming in 2017. The future looks bright for this rising star Lee Barney. His ultimate goal is to be the face of major brands and to land lead acting roles in movies. This has been a page in the life of a man shooting for the stars!