Access 205 was very pleased to make Mr. Alex Banks our spotlight artist for the month of January 2018. We first heard the young and very talented saxophonist perform at Perfect Note Jazz Hall in Hoover, Alabama back in 2017.  Since last year’s performance in Hoover, Access 205 has continued to follow Mr. Banks as he performed at various musical events throughout the state. When we first heard of Mr. Banks return to the Perfect Note, we had no qualms about making him our first featured artist for the New Year.

Alex D Banks II started playing Saxophone at the age of 12. Alex was first all district and all state in his high school career in 2013. Throughout his musical career, he has been afforded the opportunity to open and play alongside many artist and many stages including Kim Burrell, Layla Hathaway, Noel Gourdin, Eric Essix, and Maurette Brown Clark. Alex host a Christmas show every year for the past 7 years, and this past year was called “A Jazzy Little Christmas”. Alex also plays at weddings, receptions, parties, and other events. Alex has two albums out on all digital media’s called “Projection” and his most Recent released on December 16th titled “My Heart”. Alex D. Banks II has a movie on YouTube called “First Crush” off the album Projection. Both Albums are on iTunes and all digital media stores today. 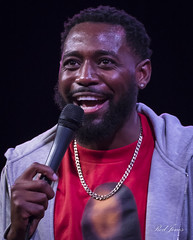